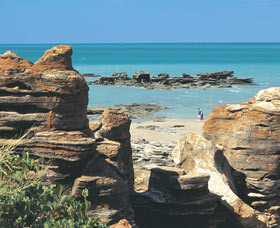 Reddell Beach is a favourite beach amongst the Broome locals, with the stark contrasts of red pindan bordering the white sandy beach. Examine the unusual rock formations with their intricate erosion patterns along the pristine stretch of beach. The calm refreshing waters are ideal for swimming or paddling with the children, and the lack of crowds makes this well kept secret spot an idyllic location. Enjoy a picnic lunch or just laze about on the beach and soak up the sun. If you time your visit at high tide, you may be fortunate to witness a spectacular phenomenon when the ocean meets the pindan cliffs and the ochre colour bleeds into the normally crystal blue waters. Reddell Beach was named after Captain Reddell who was murdered by his crew onboard the brig Ethel shortly after leaving Broome on one of many trips to New Zealand transporting supplies for the pearling luggers. Reddell Beach is less than 10 minutes drive from Broome and two minutes drive to Gantheume Point where you can witness 120 million year old dinosaur footprints on the reef. Broome is a two and a half hour flight north of Perth.